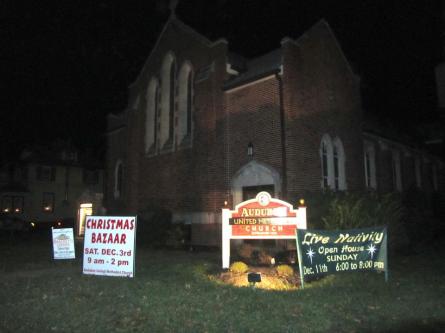 I grew up during those youthful years until, I’m guessing age fourteen, a Methodist. At one point I even sang in the choir, I still look back and chuckle at this.

My biological parents separated when I was two and divorced by the time I was about five. Both my parents lived in the same town and I was shared back and forth for a number of years prior to age eight or nine when my father moved from South Jersey (Exit 3 of the Turnpike area) to Connecticut. Everybody in Jersey lives off an exit of one highway or another. At one time I lived off Exit 4 of the Garden State Parkway. One of the best years of my youth was spent in Wildwood Crest, more stories for an other day. My mother and I would live for a number of years after the separation with my great grandparents in a second floor apartment.

Every Sunday until age fourteen it would be,  get on the church bus and go off to Sunday School. Sometimes, especially when I was in the choir, I would do church also and there was always a coffee and, after the service. No playing football on Sunday, no card playing ever and a whole bunch of rules I thought, “Really?” Did I mention no Alcohol or smoking either.

I can remember getting 35 cents for the collection when the dish was passed. I also remember getting off the bus on occasion in my teens, going in one door of the multi purpose room and out the other and playing hooky more than once. My mother has passed away so I’ll not be damned for telling that story. My self and a neighbor friend would go to a local corner store, buy a soda and candy and head to a local vacant lot where the Catholics were always playing a football game. They mostly went to church on Saturday evening. It was difficult explaining the grass stains at times. I’m sure I’ll atone for these transgressions at a later date.

I would rebel around age fourteen or fifteen, start going to a Lutheran church, my paternal side of the family’s house of worship and ultimately become a Catholic when I married my wife over fifty years ago. I went through that educational process while I was in the Marine Corps. I remain a Catholic to this day.

Today in our little village on Maryland’s Eastern Shore, the Methodists prevail. Our Methodist Women’s group are always cooking up a storm, feeding this group or that, having Teas and just plain bringing comfort food to the people of the village. God bless those Methodists. My wife and I recently took a trip to Connecticut to visit our son and his family and my step-sister and her husband. We spent 20 years as next door neighbors to my step-sister. We lived in a tight-knit community on a Cul De Sac and had a great batch of neighbors.

We got to see one of those neighbors while at my sisters. Her name is Judy, a life long Methodist and her husband Stan is a retired Methodist minister. I asked he if she had ever heard Garrison Keillor’s Public Radio piece on Methodist’s. She said no she hadn’t so I located it on the internet and read it to all in attendance.

We make fun of Methodists for their blandness, their excessive calm, their fear of giving offense, their lack of speed, and also for their secret fondness for macaroni and cheese.

But nobody sings like them. If you were to ask an audience in New York City, a relatively Methodist-less place, to sing along on the chorus of “Michael Row the Boat Ashore,” they will look daggers at you as if you had asked them to strip to their underwear. But if you do this among Methodists, they’d smile and row that boat ashore and up on the beach! And down the road!

Many Methodists are bred from childhood to sing in four-part harmony, a talent that comes from sitting on the lap of someone singing alto or tenor or bass and hearing the harmonic intervals by putting your little head against that person’s rib cage.

It’s natural for Methodists to sing in harmony. We are too modest to be soloists, too worldly to sing in unison. When you’re singing in the key of C and you slide into the A7th and D7th chords, all two hundred of you, it’s an emotionally fulfilling moment. By our joining in harmony, we somehow promise that we will not forsake each other.

I do believe this: People, these Methodists, who love to sing in four-part harmony are the sort of people you can call up when you’re in deep distress.

*If you’re dying, they will comfort you.

*If you are lonely, they’ll talk to you.

*And if you are hungry, they’ll give you tuna salad.

*Methodists believe in prayer, but would practically die if asked to pray out loud.

*Methodists like to sing, except when confronted with a new hymn or a hymn with more than four stanzas.

*Methodists believe their pastors will visit them in the hospital, even if they don’t notify them that they are there.

*Methodists usually follow the official liturgy and will feel it is their away of suffering for their sins.

*Methodists believe in miracles and even expect miracles, especially during their stewardship visitation programs or when passing the plate.

*Methodists think that the Bible forbids them from crossing the aisle while passing the peace.

*Methodists drink coffee as if it were the Third Sacrament.

*Methodists feel guilty for not staying to clean up after their own wedding reception in the Fellowship Hall.

*Methodists are willing to pay up to one dollar for a meal at the church.

*Methodists still serve Jell-O in the proper liturgical color of the season and think that peas in a tuna casserole adds too much color.

*Methodists believe that it is OK to poke fun at themselves and never take themselves too seriously.

+ You know you are a Methodist when: it’s 100 degrees, with 90% humidity, and you still have coffee after the service.

+ You hear something funny during the sermon and smile as loudly as you  can.

+ Donuts are a line item in the church budget, just like coffee.

+ When you watch a Star Wars movie and they say, “May the Force be with you,” and you respond, “and also with you.”

+ And lastly, it takes ten minutes to say good-bye!

Lake Wobegon is a fictional town in the U.S. state of Minnesota, said to have been the boyhood home of Garrison Keillor, who reports the News from Lake Wobegon on the radio show A Prairie Home Companion. Its location is believed to be north of St. Cloud and is claimed to be the town of Holdingford.

Thanks for stopping by.