How can I not tout what day this is, Happy New Year and the year of the Rooster. Red is the color, I think I have a pair of red drawers some place. Gotta find them and wear them today.

The Rooster is one of the 12-year cycle of animals which appear in the Chinese zodiac related to the Chinese calendar. The Year of the Rooster is represented by the Earthly Branch character 酉. Wikipedia

I was born a goat

in the year 1943 and on this day, 28 January 2017,  I celebrate the Chinese New Year and the year of the Rooster. How appropriate is that? The 12 animals of the Chinese Zodiac in order are: Rat, Ox, Tiger, Rabbit, Dragon, Snake, Horse, Goat, Monkey, Rooster, Dog, Pig. Each year is associated with a zodiac animal. If I make it, I’ll be 85 the next time “The Rooster Crows.”

So in the tradition of the Chinese, should you have any Fire Crackers left over from the 4th of July, light them up and have a BANG of a good time. “Happy New Year!”

At 2300 hours on Thursday the 26th I got a text from our world traveler (my son in-law) that he was in Tashkent, Uzbekistan. Considering the fact that he departed Maryland’s Eastern Shore on Monday Mid-Day, got delayed a day due to a Nor-Easter and a ground halt for weather in Istanbul, I guess that’s not half bad time. And besides, how lucky can one be to spend the end of January in such a wonderful tourist mecca of the world. Tashkent lies 465 miles due north of Kabul Afghanistan. No palm trees there I’d bet. He did earn 6,317 mileage points though on his Capitol One card.

The accused perpetrator of the deadly ISIS acknowledged killings on New Years day in Istanbul, Turkey was identified as a Uzbeki citizen. Remember what I’ve told you over your many years of making the big bucks elJefi. Just remember, “DUCK” is not a web-footed animal, when you hear the word, don’t be a feckin eejit, “HIT THE FLOOR!!”

I’m sure our Embassy in Tashkent is doing wonderful things. If your truly interested check out their website at:  https://uz.usembassy.gov/

The Embassy Courtesy of state.gov

My last little tidbit for this Blog edition is in relation to my current read, well, one of my current reads anyway. I’ve always got two or three books and several periodicals going.  I’m traveling our country with John Steinbeck and reading “Travels with Charley.” Charley is Steinbeck’s Standard Poodle. Were I to go off on a similar venture and write about it, “Travels with Ben” would be the title.

The journey takes place in the early sixties and I found an interesting similarity between the politics of the time and our recent debacle that led to our crowning of our newest leader here in the United States.

For those who were not around during that time, John F. Kennedy was the Democratic nominee and Richard M. Nixon carried the banner for the Republicans. Kennedy was a Catholic from Massachusetts and Nixon a Californian was a Quaker. To this day I can hear my mother saying, “we should never elect a Catholic for  president, the Pope would be telling the president what to do.”

At one of Steinbeck’s overnight stops he had company for a cup of coffee in his camper and conversation about the upcoming election and the goings on in the news. This was the time when Russian Premier Khrushchev was at the United Nations. Mr K would be famous for taking off his shoe and pounding the desk in front of him with it.

Steinbeck and the visitor poured themselves another coffee, added a bit of Apple Jack and continued to talk election issues. Steinbeck asked his guest “I’m not taking a poll, but how does the election seem to be going around here?” “I wish I knew,” he said, “People aren’t talking. I think this might be the scariest election we ever had. People just won’t put out an opinion.”

“Could it be they haven’t got one?”

“Maybe, or maybe they just don’t want to tell. I remember other elections where there would be pretty peppery arguments. I haven’t heard even one.”

Steinbeck went on to say that is what he heard all over the  country, no arguments, no discussion. I guess we had lots of discussion but for the person who won, not many were claiming to vote for him. I didn’t hear a whole lot of folks say they were voting for the her that lost either. The day after outcome was a surprise to most everyone, especially the media.  In this past election year so many people would not say,  I’m voting this person or that person, most likely embarrassment at the entire process is my guess. I was told at an early age never talk religion or politics, you’ll ruin friendships. My mother didn’t listen I guess.

As for me and my vote, I gave it to Senator Tom Cotton of the great state of Arkansas. No recount there.

In November of 1963 I was honored to serve as a  United States Marine and a member of the Honor Guard stationed at Marine Barracks, 8th & I, Washington, D.C. During the funeral proceedings for President John F. Kennedy I remember feeling sad and angry for our country’s loss. At the time of his election I was not old enough to vote. Would I have voted for him, most likely not, he had a funny accent. But then again, Nixon was a Quaker, aren’t they a strange lot? Wasn’t it Art Linkletter who said “People are Funny?”

While reading of Kennedy and Nixon it got a bit nostalgic for me. God Bless America!

The End is Near

My wife has a cousin out in Louisville, KY  (land of great Bourbon)  who is always sending thought provoking material. Back in February of this year one such piece of Email held the below Old Man, Boy and Donkey story.

What a great time thought I, to share this on the eve of the new year. Who will we listen to, follow or be guided by in 2017?  Or, as Polonius said in Hamlet, ” be true to thy own self.”

Will we be true to our own self as we cross our bridges throughout the year?

AN OLD MAN, A BOY AND A DONKEY WERE GOING TO TOWN.  THE BOY RODE ON THE DONKEY, AND THE OLD MAN WALKED.  AS THEY WENT ALONG THEY PASSED SOME PEOPLE WHO REMARKED “WHAT A SHAME, THE OLD MAN IS WALKING, THE BOY IS RIDING.”

THE MAN AND BOY THOUGHT MAYBE THE CRITICS WERE RIGHT, SO THEY CHANGED POSITIONS.
LATER THEY PASSED SOME PEOPLE WHO REMARKED “WHAT A SHAME, HE MAKES THAT LITTLE BOY WALK”.  SO THEY DECIDED THEY’D BOTH WALK.

SOON THEY PASSED SOME MORE PEOPLE WHO REMARKED “THEY’RE REALLY STUPID TO WALK WHEN THEY HAVE A DECENT DONKEY TO RIDE.”  SO THEY BOTH DECIDED TO RIDE THE DONKEY.

THEY PASSED SOME PEOPLE WHO SHAMED THEM BY SAYING “HOW AWFUL TO PUT SUCH A LOAD ON A POOR DONKEY.” THE BOY AND THE MAN FIGURED THEY WERE PROBABLY RIGHT, SO THEY DECIDE TO CARRY THE DONKEY.

AS THEY CROSSED THE BRIDGE, THEY LOST THEIR GRIP ON THE DONKEY, THE DONKEY FELL INTO THE RIVER AND DROWNED.

THE MORAL OF THE STORY:  IF YOU TRY TO PLEASE EVERYONE, YOU MIGHT AS WELL KISS YOUR ASS GOODBYE.

HAVE A NICE DAY! 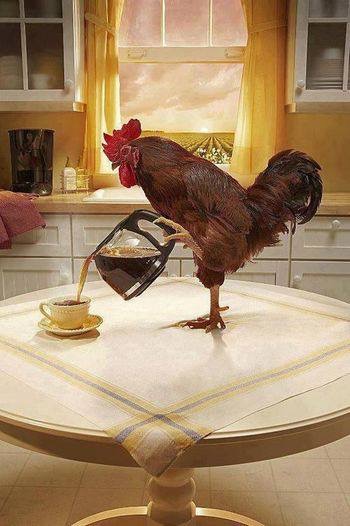 Sent by a friend.

Even youths grow tired and weary, and young men stumble and fall;
but those who hope in the LORD will renew their strength. They will soar on wings like eagles; they will run and not grow weary, they will walk and not be faint.

As you pour that first cup of Coffee on New Years day, know “The Rooster” is wishing all of you the very best in 2017.

(It is with special note that on this day my beloved signal carrier, Verizon, is sending a signal strong enough to post this dispatch from home. I am truly Blessed on this final day of 2016.)    Ah- the joy of country living!