The Marine Corps is part of the Navy, Right?

As a member of the Marine Corps, 1962-1968, I was asked if, and told I was, part of the Navy many times. In addition to WordPress, Facebook, and Twitter, I’m also on Quora from time to time. I’m not there very often as I’m not too smart and don’t have a lot of answers on a lot of things. Any answers I might have had at one time, are usually long forgotten. I guess you could say I have a lot of opinions, I mean hell, I’m 72 years old, I’m allowed to have opinions, right? I have learned one thing though, and that is, thanks to my wife, hold your tongue Rooster. Well — let us just say I’m getting better.  After a particular epiphany we, my wife of 50 years and I, in privacy, will voice our opinions to each other. Yes, on occasion I’ll get that look, and you men out there know what that look is. “Rooster, keep your mouth shut,” is the look.

Oops, where was I?  Oh yes, Quora. So the Question put to Quora was,
Do members of the Marine Corps self-identify as being part of the Navy? Why or why not?

Regan Copple, USMC Veteran 1986-1992 gave the readers this answer and

No, because we’re not part of the Navy, we’re part of the Department of the Navy, there’s a subtle difference, & not too many people know the contradistinction. Some people will say they’re the same thing, & I say no, they’re not, for one important reason. When I hear someone say that as a jibe to the Marines, I respond with, “Who is in charge of the Navy?” and they being in the Navy will usually respond with, the CNO or Chief of Naval Operations, who is an Admiral or 4-star flag officer. Here is the Seal of the Navy.

Now here’s where it becomes interesting because then the next question I ask them is “Who is in charge of the Department of the Navy?” to which they usually don’t have the answer, so I’ll reply with the SecNav or Secretary of the Navy which is a Cabinet-Level Position within the president’s administration just like the Secretary of the Army or Secretary of the Air Force. But if they do have the correct answer, I’ll reply with, “Are the same person, or to be more clear, is the CNO the same person as the SecNav, which no they are not, because one is a military position held by a ranking officer, and the other is a civilian cabinet-level position held by an appointee. Here is the seal of the Department of the Navy.

Notice they are all different.

So while the Navy is part of the Department of the Navy, and the Marine Corps is part of the Department of the Navy, they are not the same thing, think of them like two fingers on the same hand. Both the CNO & the CMC report to the SecNav, the CMC does not report to the CNO so the chain of command is clear.
Telling the last part of this I use the forefinger for the Marine Corps & the middle finger for the Navy for the end of the joke which is FTN or F The Navy, which is my way of getting back at squids who used to like to needle us jarheads with that question.

Now personally I would not use the F word nor the middle finger.  I’ve served with the Navy in numerous postings in the past, have many Sailor friends and always appreciated the Gator Navy for being the Marine Corps version of Uber.

One more little note, purely my observation and I’m just throwing this out there. If your a God fearing man or woman, you’ve most likely heard of the Holy Trinity. 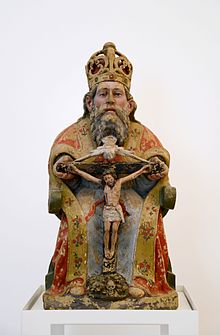 The “Shield of the Trinity” or Scutum Fidei diagram of traditional medieval Western Christian symbolism, since 12th-century CE.

The Christian doctrine of the Trinity (from Latin trinitas “triad”, from trinus “threefold”)[1] defines God as three consubstantial persons,[2] expressions, or hypostases:[3] the Father, the Son (Jesus Christ), and the Holy Spirit; “one God in three persons”. The three persons are distinct, yet are one “substance, essence or nature”.[4] In this context, a “nature” is what one is, while a “person” is who one is.[5][6][7]

Now go look at the logos up top on the Department of the Navy web site. OOH RAH!!!!

And one last thing, on that first Saturday in December I say “Go Navy, Beat Army.”